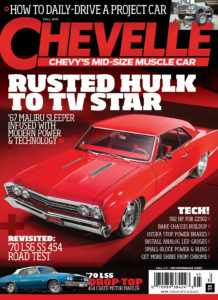 Project:  The whole concept of the 1967 Chevelle came into play when American Muscle Cars was approached by Dan Woods form Chop Cut Rebuild to share a project with Auto Metal Direct, an aftermarket sheet metal manufacture.  The premise was AMD would purchase the worst 1967 Chevelle they could find and would have the AMD installation center re-body panel the car in Atlanta at their facility and the car would then be shipped to American Muscle Cars to mock up the car, bodywork and paint, and final assemble.  After giving it plenty of thought; and also being provided with that long list of industry giants donating parts to the project, I saw an opportunity and decided to agree to the project and immediately forward ideas and thoughts on the vehicle to Kris Horton (Kars by Kris) who began the blueprints of the rendering and then shared the plan with AMD who we fenced with back and forth with design and color; However American Muscle Cars won that match and we began the journey of building a TV Car.

A 1967 Chevelle was finally located and purchased outside of Atlanta and the AMD installation center began its part of the build. I made several trips to Atlanta to check on the progress of the metal work, it was soon discovered the car was worst then anybody thought as far as metal panel replacements. With that said, Craig Hopkins at the AMD Installation center still powered through it with expertise and excellent body panels provided by Auto Metal Directs facility. Once the metal work was completed the stock factory chassis was outfitted with new suspension provided by Tony G from ABC Performance Suspension, Because of the aggressive wheel and tire package and ride height we wanted to achieve with this Chevelle Tony G also install a wider rear wheel tub for much bigger wheel. Rear suspension was completed with a Currie nine inch. After two months of heavy metal replacement and suspension the car finally arrived at American Muscle Cars.

Once the car arrived at American Muscle Cars we were notified of the amount of time we would have to build the car, it seemed unrealistic. Not to mention having Dan Woods and his crew filming and getting in the way of us trying to build a car by a certain deadline. From that point we all knew we would be working 24/7. We began by gapping the body panels to have a more consistent gap between all the panels. Next, we modified front and rear bumper for a tighter fit to the car as well as removing mounting bolts for a smooth look. The next hurdle was to build the hood from the rendering; the modified Super Sport outfitted with a portion of a cowl hood was completed and flowed into a cowl panel where all the louvers were welded to continue that smooth look. Due to the aggressive ride height and wheel/tire size we demanded, the next step was to modify the trunk floor, outer rear wheel housing, and mounting position of the rear suspension. Also, significant modifications were made to the front inner wheel wells in order to complete the aggressive ride height. We were sure there would be one more modification once the LS3 525 HP and Tremec 6 speed transmission was delivered; this combination is part of GM’s Connect and Cruise package. Once the motor and transmission were connected we began to install it; that last modification was apparent, we would need to tunnel the car. After tunneling the car we began to mock up phase pedal assemblies, brakes and related plumbing, fuel tank and related plumbing. Because we choose to use a factory front bench seat with a manual transmission we modified a factory original manual shifter to our Tremec transmission. Our next task was to begin wiring, which included Vintage air, power windows, dash, exterior, and interior components. We next secure a location for the engine management system and completed wiring in the motor. We continue to mock the car up as we move into the engine compartment and began mocking up, steering, radiator, and electric fans. Once that was completed the Chevelle was transported to Magnaflow where the exhaust was installed and upon completion the majority of the mock up phase was finished. 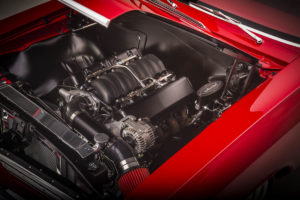 From Magnaflow the car was delivered to Ron Mangus Hot Rod Interiors where Ron and his team began mocking up our vision for the interior. Once back at the shop, we installed the HushMat with the help of Tim McCarthy. From that point we began to dis-assemble the vehicle for body and paint. Once dis-assembled the tedious work of fit and finish began. Our process began with body working panels and included three body men working around the clock….again due to time restraints. The car was body worked and block sanded three times and then prepped for paint. Early in conception I wanted a non- metallic, blood red exterior finish and PPG was able to provide us with exactly what we wanted to stay true to the rendering.

While the Chevelle was being painted this allowed our fabricators to dis assemble the chassis and suspension where it was sent out for powder coating and all detail work. Once these components were back in our possession it was re-assembled along with Wilwood brakes and related plumbing. At this time the motor and transmission were also installed onto the chassis. After paint, we began color sanding process; the finish was sanded down with four different grits of sand paper and buffed to perfection. Finally the body and chassis were re-united; doors were then installed as wells fenders, trunk lid, and hood. Front and rear glass and exterior components were then installed to the car; we then moved into the interior and began assembling the dash and installing power windows with the side glass. The car was then transported back to Ron Mangus for final assembly of the interior. The last phase was to once again transport the Chevelle to Westech Performance for initial start up and Dyno testing.